The “Mozzarella di Bufala Campana DOP” produced by FILAB s.r.l. is produced exclusively with whole buffalo milk which is warmed up and then it is acidified with a natural whey-starter. Curdling is carried out by adding rennet to milk, so obtaining the curd which is then put to drain and ripen. Then the stretching stage follows, it is a very delicate phase, during which the ripen paste is cut into thin slices and put into a container where boiling water is added; the melted paste is stretched so that a bright paste is obtained. At the end, the paste is broken off by the forefinger and the thumb, so mozzarella balls are obtained. They are dropped into fresh water in order that they are salted by immersion. Before it is packaged, it is immersed into a preservative liquid composed by water and salt.

By this processing, many stretched curd cheeses are obtained which are different only for the different sizes (mozzarella, bocconcino, cardinalino, treccia, treccina, etc.).

Consumers can observe the freshness of mozzarella cheese from its external aspect (a white porcelain colour, a very thin crust measuring about a millimetre with a smooth surface), never slimy or scaled. 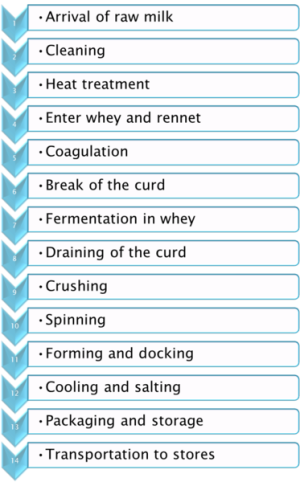 The traditional scheme of processing of Mozzarella di Bufala Campana is divided into several stages from raw milk to the shipping of the finished product.

This process can be summarized in two major stages:

1. the preparation of the curd and the subsequent ripening in serum, up to reach a sufficient acidity;

2. the spinning of the acidified spun and subsequent forming, curing and packaging of mozzarella cheese.

Load of raw milk and milk arrival at the dairy

By breedings, milk, stored in refrigerators, will be transferred in truck tanks by pumps to be brought to the dairy industry where it is discharged into reservoirs refrigerated storage.

During the discharge phas , the milk passes through a bag filter to be cleaned from impurities coarser. The filter is multi‐purpose equipment of small volume, simple operation, energy saving, high efficiency and good adaptability.

After the cleaning step, the milk is sent to the storage tanks and cooled through plate heat exchangers. The cooling system is flow is a so‐called flow opposite: the milk, from the truck (4‐10 °C), is transferred in chillers through a cooling plate, the output of which reaches 4°C thanks to a flow of cold water in countercurrent. Then it is conveyed to the silo. In case you want to transform directly the milk, it is sent to the pasteurizer where it is heated to a temperature of 72°C for 15'', cooled to a temperature of about 38°C and poured directly into the polyvalent tanks.

Trasfer to bowl: whey and rennet, coagulation and break up of the curd

In the polyvalent tanks, present in a number of three pairs each with a capacity of 2000 liters, the whey and the rennet are added to milk. The polyvalent tubs have the functions of: heat the milk and keep it at room temperature; break the curd; drying and fermenting the curd; expel the curd.

The whey is produced by the fermentation of whey obtained by processing of the previous day. It is prepared and checked with care: conveniently it is used to correct the acidity of the milk.

The rennet is added after the heating of the milk and the addition of the whey, after mixing the same in water. It is a mixture composed of various types of proteases (including chymosin) able to separate the casein and cause coagulation of the protein mass not more soluble in water.

After about 20 minutes of entering the rennet, the milk is transformed into curd hich is matured in vats. The coagulation depends on  many factors, including the time that characterizes the type of cheese. We make several breaks: the first is "round" with a skimmer or "cross" with the stick to start the leak of the serum. Then you make the break "a nut " with a skimmer. In the polyvalent tanks, the walnut break is mechanized, with the use of special equipment, said blades planetary.

There is the fermentation of the curd in the serum, where it will remain for about 3 hours. In traditional systems, sieves are used to maintain the curd under serum and to perform deletion of the serum from the vat.

After the fermentation phase in the whey, the curd is placed on special tables for a further leak of the serum and it is cut with the appropriate sickles. Thanks to a cutter with rotating blades, the curd is cut into small fragments. The shredded curd is placed in a particular container, said "combecina". In combecina, hot water is added (approximately 96°C) and thanks to the movement of the two tools (sticks) the cooking and the spinning of the curd are the following phases.

After the end of spinning, the spun paste is fed into the hopper of the molding where two augers push the screw towards the molding drum in order to obtain the product in the desired size. Drums are in a special aluminum alloy, with concave radian holes, whose diameter is to be determined in relation to the needs of production:

Once the forming stage, the product, by gravity, is conveyed in tanks containing cold water, in order to cool it and let him retain the shape.

The forming can be done by hand according to the traditional method and it takes the name of “mozzatura” or “docking”.